We’re not super at keeping the website updated, but plenty of things have been happening in the Takrawesome world!

I (Daniel) flew to Thailand at the start of July to join Alex in Ratchaburi. Although the Thai league is finished for the year and the players have left Ratchaburi to return to their non-takraw lives, there is still a solid group of players (men and women) and coaches in the area for us to train and play with.

Things have been pretty hectic over here, good hectic, but busy! I hadn’t played serious takraw in Australia for quite some time due to stress-fractures in both my lower legs (That’s a story for another post!) So training twice a day was a pretty brutal re-introduction to takraw. It also doesn’t leave a whole lot of time to do much else other than eat and sleep.

So what have we been up to? Here’s the short version: 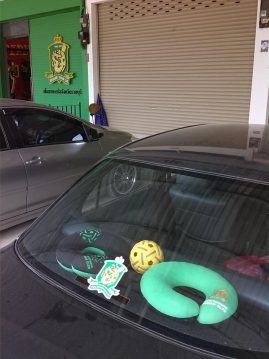 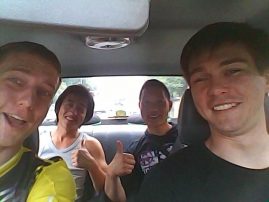 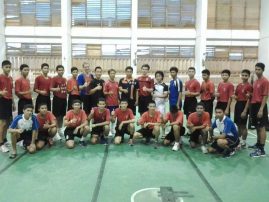 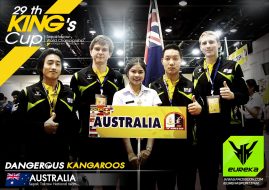 Now for the slightly longer version:

We wanted to buy a car over here so we can get around Thailand with a bit more freedom, find our way to small takraw competitions etc. Back in Australia, Alex and I have spent a fair bit of time turning spanners on a variety of cars so we’re comfortable inspecting second-hand cars and set out to find a bargain locally. In the end we found an honest enough looking 95′ Toyota Corolla that fit the bill it has air-conditioning and runs LPG so it’s cheap to get around in, the sellers were even nice enough to throw some snacks in to sweeten the deal (hahaaaa bad puns). Just like that, we had wheels. Rad.

Jesse and Tou came over from Australia at the end of July to complete our King’s Cup squad of four. We picked them up in our sticker’d up Corolla from Suvarnabhumi Airport in Bangkok and headed off to Suphanburi for some training.

We spent three days there training with their amazing teenage players before heading back to Ratchaburi for a few days prior to King’s Cup. We’d never played together as a team of four, so it was pretty hasty preparation to turn our individual skills into a coherent team. ..but it was a lot of fun!

The Australian King’s Cup campaign this year wasn’t as successful as we were hoping. Due to changes in the event structure, Division 2 Regu and Doubles teams only played two group stage matches. To come all the way from Australia and have only four guaranteed matches – two Regu, two Double was quite frustrating. With our slightly weaker team due to my injury and not being able to spike we were unable to really challenge Iran in Doubles, and also came up short against Chinese Taipei in Regu. And that was that, our 2014 King’s Cup campaign came to an end. A win in doubles over Bangladesh, and a win in Regu over Sri Lanka. It was still a fun experience but a tad disappointing.

Once our matches were over we got to kick back and watch the world’s best sepak takraw players of all divisions compete against each other. We filmed a bunch of matches and Alex has been editing up a storm and started uploading them to our YouTube Channel – be sure to watch some! I also took a handful of pictures which you can find in an album on our facebook page

Tou and Jesse are back in Aussieland and Alex and I are now back in Ratchaburi recovering from the flu and slowly getting back into takraw training. We’ll see what the future has in store for us, but I have no doubt it’ll be exciting!

We’re sorry that we haven’t updated the website with news more often, but we post to Takrawesome’s facebook regularly, so if you’re not sick of us yet – that’s where you can stay up to date. Otherwise… Life is for living, go play some takraw! 😉

PS Don’t forget you can still purchase equipment from our online store and have it delivered to your door. Check out our shop and let your friends know where to buy takraw gear!