So the 15th-16th of March was a very busy time for sepak takraw all around the world. In Thailand it was the first round of the 2014 Takraw Thailand League, in Malaysia the 2014 Kulim Sepak Takraw Open was held, and if you’d hopped on a plane and headed to Basel, Switzerland you would have found the 2014 Sepak Takraw Swiss Open getting underway.

The Swiss Open is one of the larger sepak takraw tournaments held in Europe each year and this year was no different. In the regu competition there were 25 teams vying for gold, with competitors from Belgium, France, Germany, Malaysia and of course, Switzerland. As it is an open competition there were Men, Women and Juniors all competing against each other which makes for a wide variety of skill, and with six courts playing concurrently we’re told that the atmosphere was awesome! 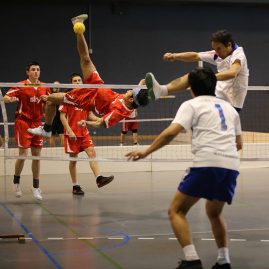 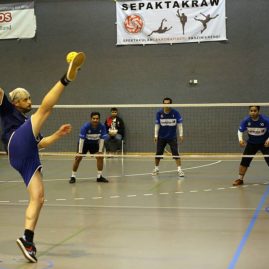 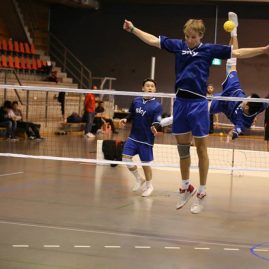 Thanks to the Swiss Sepak Takraw Club and http://www.tobias-indermuehle.com/ for the images

Germany’s Elmshorn takraw club once again proved themselves as one of the strongest European takraw clubs with their two entries ultimately having to play each other in the semi-finals. Elmshorn 2 proved too strong for their clubmates Elmshorn 1 and went on to meet the Malaysian team in the final. The final was a 3 set affair, but eventually Elmshorn 2 reigned supreme and won 15-11, 5-15, 15-8

For a full listing of teams, events, and the complete competition ladder check out the Swiss Sepak Takraw Club’s konkuri profile